Oh that Canada / USA border closure! We have finally just received the past three months of mail from our Ferndale PO Box, which is now closed, in late January. So as a temporary measure, please direct all mail and correspondence to our Canadian address.

Important Message For Our American and International Readers

On March 11, 2013 the oldest Anglo-Israel church in North America celebrates its eightieth birthday. We are one of the few ministries with a vibrant weekly worshipping congregation in our own church building, and it has been my privilege to serve the local flock as pastor for over 35 years. We are fast closing in on a century of proclaiming the Gospel of the Kingdom and we recognize that an entirely new set of challenges are confronting us today and in the future. 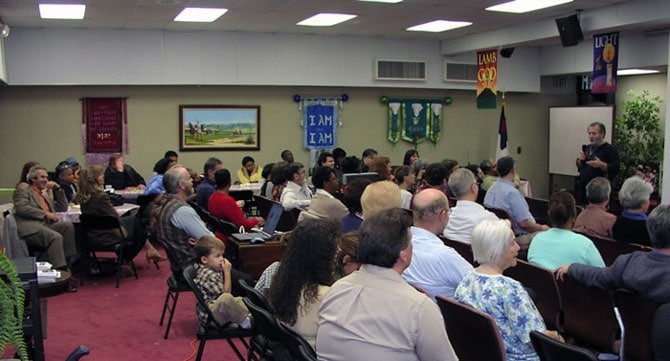 Change is all around us. We were organized as a church body in 1933 during the height of the Great Depression, when Detroit was overwhelmingly Caucasian and Christian and the values of patriotism and nationalism were a part of the bedrock values then found throughout our nation. Today, with any form of white ethnic pride angrily denounced as racism and hate, and national pride derided as an objectionable form of arrogance, members are often shy about expressing our beliefs to others. Yes, the times are tough. Yet every era presents its own opportunities.

Our roots go back even further to a now little-known but hard working evangelist named Daniel J. Smith, who, in a circumstance now long forgotten, came upon a book written by a scholar and teacher named John Wilson. The book, “Our Israelitish Origin,” was published in 1840 in England, soon reprinted in America, and spawned the worldwide British-Israel movement. This book was positively life-changing for untold thousands of people who learned for the first time that they were a part of God’s covenant people, with the attendant duties and promises and blessings––not just strangers and aliens standing forlornly outside admiring Divine benefits that they could never hope to touch or acquire. This revelation was and is an exceptionally important truth, for the Biblical covenants have both national and personal extensive responsibilities and benefits. We often refer to our belief as “the national message,” and it does indeed concern the destiny of nations, but we should never forget that it has a definite personal application to each of us as well. Learning this truth was life-changing for me, as it certainly was for Daniel Smith, who devoted a major portion of the remainder of his life to sharing this good news with many others. A few details about his life should be an inspiration for us today.

Daniel had opened a photography studio in a prime area of downtown Detroit on Woodward Avenue near the waterfront. Yet his great passion was the Word of God, and he eagerly distributed tracts, books and other literature to those who visited his studio. He also “talked up” the subject with those he met, and was apparently instrumental in arranging for the famed British-Israel expositor, Dr. William Henry Poole, to move from Toronto to Detroit in 1879 to pastor one of the largest churches in the city, Simpson Methodist-Episcopal Church, with nearly a thousand members. Daniel Smith helped to bring in other guest evangelists, including Edward Hine who lectured here in 1885; at the time this Englishman was the leading spokesman for the British-Israel movement worldwide. Other pastors and churches learned this truth also, and by the 1930’s the British-Israel-World Federation referred to Detroit as the center of B.I. influence in America. It was at this most favorable time-period that our church congregation was formally organized.

What has happened since then? One by one, many mainstream Christian leaders decided that this message was “too controversial” and might lead to reduced attendance and offerings. The pastor of the largest Pentecostal church in our area, boasting several thousand members, has attended a Bible conference at our church, where he confidentially told me that he understands and believes our message but cannot teach it because “it might offend some people.” Tremendous truths have been devalued in favor of tremendous crowds and the tremendous revenue they might bring. Sermons today tend to be self-centered rather than God-centered, with a focus on the popular human philosophy of “self help,” personal development and “encouragement.” The New Testament defines sin as “transgression of the law” (1 John 3:4), and since the pulpits have “abolished” the Old Testament moral laws of God, you could reasonably infer that a culture of sin is being sponsored from the pulpit. Scripture says that the wages of sin is death (Rom. 6:23), and we are Spiritually dying as a people. Murder rates and other crimes are making records all across our land, and do you not think that there is a reason? The situation in society today cries for an increase in evangelism, a focus on our (God’s!) message, and the proclamation of the whole Word of the Lord.

A big “buzz-word” today is “inclusiveness,” and our message is much more inclusive than the exclusiveness of modern theology which identifies the covenants only with the small Jewish state and people. Another popular concept is “integration,” and we certainly believe in integrating Biblical principles into everyday life. Again, we hear much about “diversity,” and whole-heartedly believe that there ought to be much more diversity in pulpit sermon instruction than John 3:16 and altar calls. What I am saying here is that we need to frame our message in the language of our current era and in a way that people today can understand, as the Apostle Paul advised: “I am made all things to all men, that I might by all means save some.” (1 Cor. 9:22) Paul knew how to reach out to people.

The internet is a wonderful low-cost tool to reach out to multiplied thousands of people on a daily basis with our message, yet it appears that a majority of British-Israel churches and ministries here and abroad have little or no web presence or website whatsoever. As a result, enquirers who google “British-Israel” are instead met with pages of anti-B.I. sites filled with false and ridiculous propaganda and other nonsense. Modern Israelites today are not only “lost” sheep, but Spiritually and physically perishing in a toxic atheistic environment. We have the antidote! Should we be hiding it from the sheep?

One of our biggest obstacles is traditions of men. This was the case in Jesus’ day (Mark 7:8), and it has ever been the case. Yes, all too many people cannot seem to think for themselves; they must instead “ask their minister,” who in consideration of keeping his job and income simply presents to them the denominational position. Years ago, during the 1960’s, our church pastor at that time was a longtime Anglo-Israel author and exponent, who eventually left our pulpit for a higher-paying position at a local Methodist Church. I ran into him one morning at the post office and asked how the B.I. message was going over with the people at his new pastorate. “Oh, I do not teach it there…they wouldn’t understand it,” he said. The Apostle Paul might have asked at that point, “Just how will they hear and understand without a preacher to tell them?” (paraphrasing Romans 10:14) Should we only proclaim God’s truth if we are absolutely convinced that it will meet a positive acceptance? I wonder what the Apostle Paul––who persevered in spite of being beaten and driven out of several cities––would have said to that!

I am often told when witnessing that our American mainstream churches do a lot of good. That may be true, but are all of these “good things” what they really ought to be doing? Author Mark Greene has wisely observed, “…you can do an awful lot of good things without tackling the one thing that might really make a difference.” Think what a difference there would be in our land with a general knowledge of our identity and responsibilities as God’s Servant People! Yes, that one thing would help solve a lot of problems and really make a tremendous positive difference in people’s lives and in the life of this nation.

As we look to the years ahead, our missionary adventure continues. After eighty years, society has changed, our methods have modified, but our central message remains bound upon the same Scripture rock as ever. We recognize that we are the Servant People of God, with duties and obligations that come with this high calling. Let us then be about our Father’s business! (Luke 2:49)

Pastor Jory Brooks is an American and pastor of the oldest Anglo-Israel church in North America, located in Detroit, Michigan. He is also Vice-President of the “The Servant People, Canadian British Israel Association” and together with President Mary Bennett, has been a driving force in that organization. With his keen interest in history and research, he has updated and written many fine publications for CBIA. When you read a Jory Brooks article, you know you are in touch with one of the foremost scholars of the Israel Truth. He is a speed reader so gets the most out of the hours per day he spends in research. His articles in our magazine are invariably fresh and informative and he also writes a quarterly article for a British publication. It is a tribute to his wisdom that his articles are very often picked up and reprinted in other Israel Truth magazines. Jory is also a sought after speaker and has delivered messages throughout the United States, Canada and the British Isles.

Our Association is over 110 years old and all during that time we have been spreading news of the Israel Truth and the Gospel of the Kingdom to our brethren around the world. We would not be able to do this if it wasn’t for the kindness of our readers because we are funded totally through donations and gifts.

We could not do this without your support! Click either of the buttons below to donate in the currency of your choice.