“And Cried Every Man Unto His God” Or Are We Still In Jonah’s Ship? 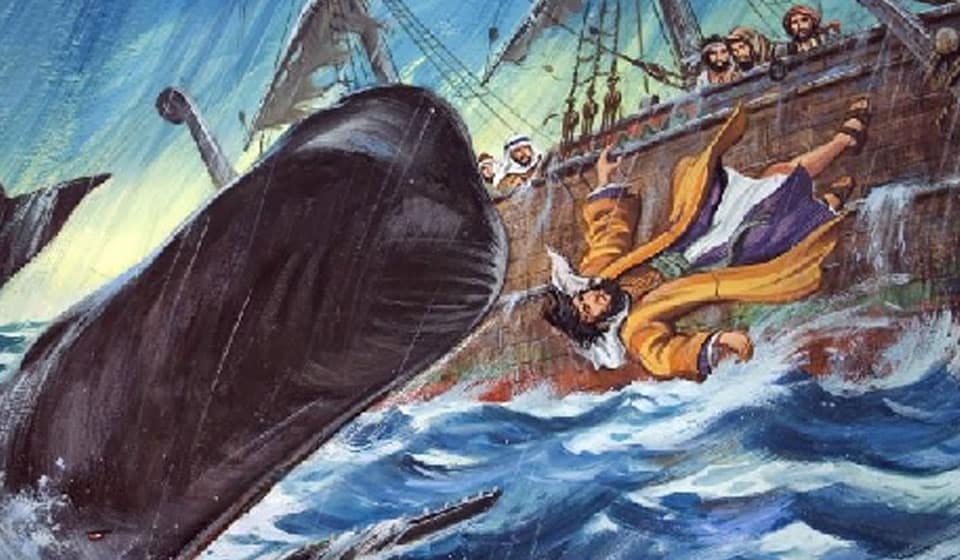 “Then the mariners were afraid, and cried every man unto his god, and cast forth the wares that (were) in the ship into the sea, to lighten (it) of them. But Jonah was gone down into the sides of the ship; and he lay, and was fast asleep. So the Shipmaster came to him, and said unto him, What meanest thou, 0 Sleeper? Arise, call upon thy God, if so be that God will think upon us, that we perish not. ‘(Jonah 1:5-6)

It occurred to me, that if we as a nation, felt the need (as we did in both World Wars) to have a National Day of Prayer, people would be praying to various gods, since we are currently living in a ‘multifaith’ Society. Indeed, we have a variety of immigrants of different faiths, living in our Christian-Israel lands, and they would, quite naturally, pray to their particular gods.

This brought to mind the story of Jonah, and made me seriously wonder if we are, metaphorically speaking, still on board his ship, bobbing up and down frantically upon the stormy sea.

When Jonah had fled from the Lord and boarded the ship bound for Tarshish, it was because he feared to do the work the Lord had assigned to him. And, not content with just being aboard, he had taken refuge, “and was gone down into the sides of the ship; and he lay, and was fast asleep.” Shutting himself off as it were, from the situation and his responsibilities, even hiding himself away, hoping no doubt that the Lord, not finding him, would forget about him, and maybe find someone else to do the job in question!

So, when the storm had broken out, Jonah was unaware of it. Even so, it must have been a violent storm for “the mariners were afraid, and cried every man unto his god.” The Shipmaster finds Jonah asleep below, probably whilst searching out the baggage they were casting out into the sea to lighten the load. He wakes Jonah up, telling him to call upon his God. Presumably they had accepted that their own gods had not been able to help their predicament.

Whether Jonah did or not we are not told – possibly not, as he was, remember, running away from Him, and it would be rather embarrassing for him to have to ask for help in that awkward situation! However, the mariners decided to cast lots to find out the cause of “this evil upon us” – and low and behold, the lot fell on Jonah. His game was up! This caused them to question Jonah, and they asked;

“Why is this evil upon us?”
“What is thy occupation?”
“Where are you from?”
“Of what people are you?”
In other words – just who are you?

Jonah told them he was a Hebrew, who feared the Lord, the God of heaven, which hath made the sea and dry land. We are then told in this account that the men were exceedingly afraid – probably all the more so when Jonah revealed to them he had fled from the Lord. For no doubt they would have heard of Jonah’s God – the God of the Israelites – and of the things that He had done. In fact, they were quite probably terrified.

Once Jonah had confessed he was the cause of the storm, they tried to get him safely to the shore, possibly thinking it might please his God – even though Jonah had told them to cast him overboard. Eventually they had to succumb to his wishes, and Jonah was thus cast into the raging sea – where, as we know the Lord had prepared ‘special’ transport to take him where He wanted him to be. Meanwhile, the storm abated!

Returning to the scenario of our Christian-Israelite countries calling for a day of prayer, because of some calamity – it is interesting that whilst writing this article, President Trump, in response to Hurricane Harvey and the awful flooding in parts of Texas, had instigated a day of prayer. Part of his speech to this effect says; “I urge Americans of all faiths and religious backgrounds to offer prayers today for all those harmed by Hurricane Harney. Each of us, in our own way may call upon our God for strength and comfort during this difficult time. I call upon all Americans und Houses of Worship throughout the Nation to join in one voice of prayer, as we seek to uplift one another and assist those suffering from the consequences of this terrible storm.”

It is a step in the right direction for President Trump to have called for such a day of prayer, and we hope and trust that the prayers of those praying to Almighty God – the God of Abraham, Isaac and Jacob – will be heard, As to our land of Great Britain and Northern Ireland, I wonder what type of calamity it would take for our beleaguered church leaders and politicians here to call for such an event, since most tragedy’s nowadays bring forth candle lit vigils and flowers piled up everywhere. However, with the North Korean situation as it stands currently, the whole world may soon have cause to call upon their gods/God.

Instead of calling for ‘lots’ to discover the reason for calamities the trend today is to have a long drawn out inquest. Concerning Great Britain and our Brexit, the fault will always be ours – for we went where we should not have gone, and sooner or later, our God, whom we had turned away from, would come after us. And then perhaps it would be made plain who we really are!

Once revealed, would not our enemies be afraid? You may think that because Almighty God has not openly shown his wrath at the things that have gone on since Biblical times, it is considered by most that He doesn’t exist anyway – or even if He does, He’s not interested in us anymore and has left us to get on with it. But if something did occur that actually showed He is coming back – for His people – then everyone would be afraid. Certainly our enemies, because it is well known what punishments befell Israel’s enemies of old. Perhaps some immigrants that have moved to our lands may even flee back to their own lands – leaving us by ourselves – to face the music – because, having become aware of who we are, and if we, like good King Josiah, rediscovered the book of the Laws of God, and saw how we have so gravely sinned by serving other gods, and idols, and spurned His Commandments – we would certainly be afraid too.

For our task has been to live God’s way – but instead of doing so, and reaching out to other nations to teach them of Almighty God and His Son, Our Saviour Jesus Christ (as we once did!), we have instead succumbed to and joined forces with those who do not worship the Lord, and allowed them to come and dwell amongst us (which by itself is not necessarily a bad thing) – but bringing their own religions and gods with them, allowing them to build temples to these gods, whilst downgrading our own Faith and putting false pagan gods on a par with our own God Almighty is.

Most surely, we have been travelling in the wrong direction, and on the wrong boat!

Reconsidering Jonah in his precarious situation on that boat – the mariners, to their credit, tried to get to the shore with Jonah aboard – but God was having none of that. He had come for Jonah, and Jonah He would have.

So, Jonah, jettisoned into the sea was abandoned – but not lost. God had him encapsulated alone, where he cried out, full of repentance to God – and God delivered him to the place He wanted him to be.

And so, likewise, we shall find ourselves alone – probably in a very precarious situation – where we shall indeed turn back to the Almighty. Then perhaps the Spirit of Elijah, or Elijah himself shall descend, to turn us back into the people we should be – God’s people – ready to receive Our Glorious Lord and Saviour, Jesus Christ, who Himself will shortly return too.

Things may get very dire indeed, but even so, come Lord Jesus. Amen.

A Time for Reflection

The Goths A Branch of Israel in Exile

A Special Report – America at the Crossroads